You can organise your holiday in Badenweiler at the Hotel “Morgensonne” in many different ways. Excursions and cultural activities make the days with us an unforgettable experience.

- the perfect combination of ancient bathing culture with modern architecture

The Roman Bath Ruins in Badenweiler, in the middle of Germany’s most tree-filled Kurpark, are one of the most important Roman monuments in Baden-Württemberg and are considered the best-preserved thermal baths north of the Alps. The thermal complex developed in several construction phases from the 1st century AD onwards. In the 18th century, the bathing complex was rediscovered and has been covered with a multi-award-winning glass construction as a permanent exhibition since 2001.

To the Badenweiler Bath Ruins 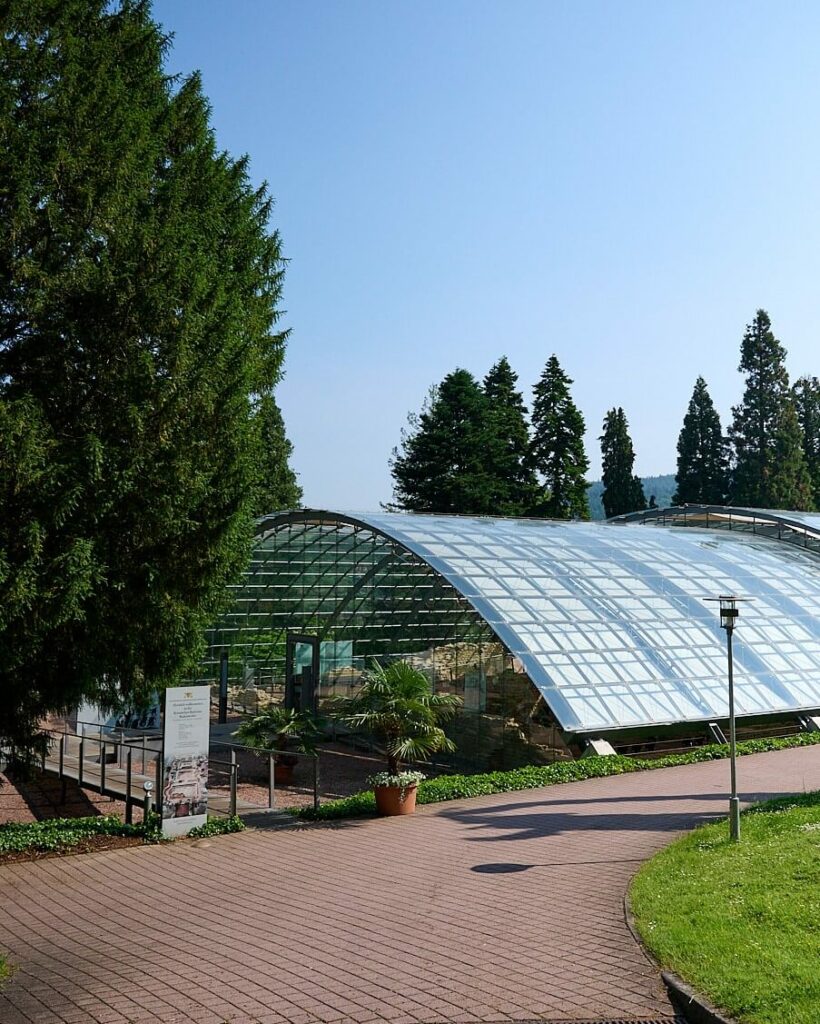 We also have a lot to offer in terms of cuisine in our region. The cuisine is very varied and diverse. In every village you will find an excellent country restaurant known for its specialities.

Upscale cuisine can also be found here. Due to the proximity of Switzerland and France, a strong development has taken place in the last few years and several starred restaurants are within easy reach of Badenweiler.

We will be happy to give you recommendations for a culinary delightful stay.

The Markgräfler wines -Spoiled by the sun

Probably the best-known “Markgräfler” is the Gutedel; its wholesomeness cannot be described, only experienced for yourself when you enjoy it. The Gutedel grape is very demanding and only finds the ideal conditions here in the Markgräfler Land, plenty of sun and sufficient moisture to thrive excellently.
In addition to the numerous winegrowers’ cooperatives, there are many private wineries in the Markgräflerland. Whether white wines or Burgundies, there is something for every taste in our region. Visit us and taste the noble grape juice.

Here are the best-known winegrowers’ cooperatives and wineries:

With a total area of around 850,000 m², Europa-Park Rust is Germany’s largest theme park. There are over 120 attractions and several shows in 15 themed areas, 13 of which are country-specific. The park also includes four adventure hotels and a cinema.

Gold panning on the Rhine

Gold panning refers to the mechanical separation of wash gold, heavy minerals and dewy rock in flowing water. On the Rhine, gold lies in the sand and invites visitors to find it. Fun for the whole family.

The metropolis in Breisgau captivates with its small-town atmosphere. Numerous small alleys and brooks as well as numerous museums and sights make a trip here an experience. A visit to the cathedral and a walk through the large weekly market on Saturdays is almost obligatory.

The industrial past founded the wealth of this city, where even today the many museums are closely linked to industry. The best known is probably the Schlumpf Brothers’ Automobile Museum.
The old town is a wonderful place to stroll and immerse yourself in the cosmopolitan atmosphere of this textile city. There are many historic buildings to visit, such as the town hall (Hôtel de Ville) or the Protestant church “Temple Saint-Étienne”.
Thanks to the dynamism of the city’s cultural players, many interesting museums have earned Mulhouse the title of “City of Art and History”.

There is much to discover in Basel:
In Basel, for example, you can choose from almost 40 museums. Friends of opera, ballet and drama get their money’s worth.
In addition to large well-known industrial sites, the city also has many green zones.

The range of leisure activities is huge. The city’s diverse gastronomic scene is well-known and popular.
Unlimited shopping opportunities show the Swiss lifestyle.

Colmar is known as the jewel box of Alsace. Despite the many wars that have engulfed Central Europe, Colmar has managed to preserve its beautiful old town.
A city walk takes you through Little Venice, among other places.

Worth seeing are the 18th century town hall, the arcaded house, the customs house, the “Maison Pfister”, the Bartoldi museum and of course the widely known “musée d’Unterlinden” and the Isenheim altar from the early 16th century.

Strasbourg is considered one of the most beautiful cities in the world, not least because of its landmark, the Strasbourg Cathedral.
The centre of the city, also known as the “Grande Ile”, has been declared a World Heritage Site by UNESCO for its diverse architecture.
Münsterplatz is considered one of the most beautiful market squares in Europe, partly because it is home to numerous picturesque half-timbered houses, some of which have four and five storeys. A showpiece of the Münsterplatz is certainly the famous, richly decorated Kammerzellhaus (French: Maison Kammerzell).

Not to forget the numerous EU institutions such as the European Parliament, the Council of Europe or the European Court of Human Rights. which celebrates its 1000th anniversary in 2015!

Give us a call!